Another hand me down recipe that my Grandmother cooked for her Children and on a recent weekend visit Mum cooked this up along with my wife who handled the camera. It’s awesome to have a few recipes coming up where I’m not so involved, just helps speed things up a bit 🙂 But then the usual problem that crops up, although this was done at the start of lent I just managed to get this up now. 🙁 As they say better late than never 🙂

The lack of Goan vegetarian recipes is slowly coming to an end, I have two more scheduled. Now we shall cook up Shevgyachyo Shengo Sukhe or Goan Dry Drumsticks. It isn’t coincidental that this goan delicacy is cooked during the Drumstick season, you would notice that at the time we had this on the table the drumstick trees were loaded as well as the markets have a surplus amount of Moringa.

Out of the above ingredients, you need to keep aside 1/4th of the coconut for garnishing the rest of the scraped coconut goes into the grinder along with the pepper, cumin, turmeric, chilli powder and garlic.

Blend all of them and you will need to add a little water to get it ground nice and fine.

Once your masala is ground keep it aside and you heat up the oil.

While the oil warms up chop the ginger up into medium sized pieces and drop them into the oil.

Next up is the onions chop them onions and throw them into the hot oil. Sounds sadistic 🙂

Push them around till they’re evenly fried yeah cooking can be a good release of emotion haha.

When the onions are getting golden throw in the tomato and continue to give it an occasional stir.

When it looks like the picture below it’s time to proceed.

Add the blended drumstick sukha masala and let that fry as well.

Drop in a pinch of salt to get those flavors out and give the masala an occasional stir.

After a couple of minutes add the drumsticks to the masala.

Give it another stir so the drumsticks are coated with the masala.

Get all the remaining masala out of the blender with the help of a little water and add it to the dish.

Don’t over do the water as you know it’s a dry dish, add in the kokam and stir.

When the drumsticks are nearly done and the water has reduced add the coconut kept aside for garnishing.

Once the water has evaporated the Goan Dry Drumstick is ready. 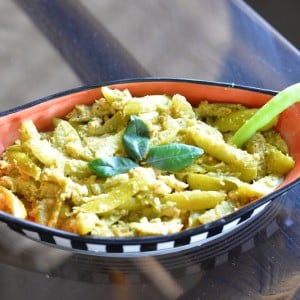